On September 25, 2008, two weeks prior to his due date, Kaleb John-Thomas (named for both of his grandfathers’) Ogden came into this world at a healthy seven pounds six ounces. Kaleb was born with positional foot disorder, which required him to wear a series of casts and special shoes to correct his feet. Which meant he missed out on a couple months of valuable tummy time. Then at four months of age he had out patient surgery to correct a hydroceal which ultimately became infected and required a two night stay in the hospital. Despite these two issues, Kaleb seemed like a perfectly normal and healthy little boy.

Throughout the first six to seven months of his life, he hit all of his milestones. He rolled over when he was supposed to, laughed, babbled, and he learned to sit when placed in a sitting position. We watched in amusement as he attempted to put his thumbs in his mouth and learned to clap. We were enjoying everything he did!

Around seven months of age we noticed that the other kids in daycare were sitting on their own, learning to crawl and some had even begun taking their first steps while Kaleb struggled to stay sitting. We noticed that he would just fall over without ever attempting to catch himself. He seemed to sit slumped over like a little rag doll. He then lost interest in his toys and we noticed that his eyes weren’t moving smoothly.  Every fiber of my being began screaming “something is wrong”. We discussed our concerns with our pediatrician who initially told us not to worry that crawling isn’t considered a milestone, in fact, some kids never crawl at all they go straight to walking. He said that when we come back for our one year check up, if he hasn’t started to pull up, he would refer us to a neurologist. When Kaleb was ten months old, we went back to the pediatrician’s office for an ear infection and again expressed our concerns, he still wasn’t worried but because we were, he gave us the referral to a neurologist.

In August of 2009 we began what would be seven months of blood tests, to include genetic testing, an EEG and a MRI - all of which came back normal. We also started both physical and occupational therapy and by his first birthday, Kaleb could no longer sit by himself.

Our therapist suggested we take him to a pediatric neurological ophthalmologist. After nearly a three month wait for our appointment, on February 23, 2010, what we thought to be a routine eye exam changed our lives forever.

Dad usually comes to all the appointments, but couldn’t make this one which is no big deal I mean after all, this was just a routine eye exam. When the doctor finished his examination his demeanor had changed. He told me that what he saw would help our neurologist make a diagnosis, he clearly did not want to tell me anything more. I asked him the only thing that came to my mind, already knowing what the answer would be, I asked “is it bad?” and he replied “yes, it can be”. Seeing that I needed something, he asked me if I had ever heard of Tay-Sachs Disease, which I hadn’t - but he gave me something to Google when I got home.

I put Kaleb in his car seat and he began to cry, I called Dave and told him what the doctor had said, he had never heard of Tay-Sachs either but said he’d look it up and call me back. Kaleb cried for the entire thirty minute car ride home, almost like he knew what we were about to find out. Dave called me back, his tone was very somber and he simply said “we don’t want that” and told me he was coming home. I looked it up myself and couldn’t believe what I was reading. This truly is a parents worst nightmare.

When I put Tay-Sachs Disease into my search engine, I found the National Tay-Sachs and Allied Diseases (NTSAD) website (www.ntsad.org). They had so much information and none of it was good. I discovered that Tay-Sachs Disease is caused by a missing enzyme that is responsible for breaking down waste in the neurons/cells of the brain, because the waste isn’t broken down, it accumulates in the cell causing it to die, there is no cure for this disease. “The destructive process begins in the fetus early in pregnancy, although the disease is not clinically apparent (symptoms do not start) until the child is several months old. By the time a child with Tay-Sachs disease is three or four-years old, the nervous system is so badly affected that life itself cannot be supported. Even with the best of care, all children with classic Tay-Sachs disease die early in childhood, usually by the age of 5, although some do live longer.”

With tears streaming down my face I just kept thinking, this can’t be, our baby, who seemed to be perfectly normal and healthy was going to die? There has to be a mistake! Two days later we were sitting in our neurologist office and he told us that the ophthalmologist saw “cherry red spots” which is an indicator for only a few disorders, none of which had a better outcome, all he could say was “I’m sorry”. A week and a half had passed after the blood test and we were notified that the lab had made a mistake in drawing the blood and we would have to do it again, could this nightmare get any worse, here we are waiting to find out the fate of our child hoping and praying that somehow they were wrong, that the doctor had made a mistake and we have to do the blood test again and wait another week or more?

On March 19, 2010, we discovered that they were wrong, Kaleb has Sandhoff’s Disease which is a more rare form of Tay-Sachs and a more rapidly progressing disease, with Sandhoff’s Disease death usually occurs by age three. At the time of diagnosis Kaleb was seventeen months old. Now it was real, in a moment every dream we had for him disappeared. I was waiting for him to hold his arms out for me to pick him up, now I know, this will never happen. I would never get to hear him say, “mommy, I love you“. There would be no first steps, I would not get to walk him to school for that first day of Kindergarten, no sports or learning how to drive, no dates, no proms, no graduation, no wedding. With two little words our lives had changed, forever.

We became members of the NTSAD and as luck would have it, they had a conference two hours away from our home that April. We met some amazing people at this conference, people who have walked in our shoes, who had lost their child to one of these diseases and people who were walking in our shoes now. We learned that a cure is within reach, that they hope to go to clinical trial in a couple of years with Gene Therapy - but a couple of years will likely be too late for Kaleb. We also learned that a couple children with Tay-Sachs Disease had received a cord blood transplant which slowed the progression of the disease but this is a very risky procedure, some who have attempted the transplant did not survive. Even knowing the odds, we decided we had to at least try, we have to keep him alive long enough for a cure to be found.

We traveled to North Carolina to meet with a group of specialists at Duke University. During our evaluation, we discovered what was to come. Kaleb would eventually start to have seizures, he would become unable to swallow and need to have a G-tube, he would be blind and eventually become paralyzed. We also learned that Kaleb was not a candidate for a transplant, they believed it would not be beneficial for him as he was too far progressed in the disease and felt he would not survive the procedure itself. We were told that we had a year, maybe two with him and that we should take him home, keep him comfortable and love him. That was it, any little glimmer of hope we had was gone, there was nothing more we could do.

In the months that followed, we watched as the seizures took over his little body, he no longer laughs and he can only smile now between seizures. He cries occasionally when he is uncomfortable and he is now G-tube fed. He can no longer roll over or hold up his head, he spends his days either sitting in a special chair or laying down, depending on mommy to know when he needs to be moved. We are now on hospice and the toys we had hoped he would play with sit untouched. Our house looks like a medical facility with feeding pumps, suction machines, oxygen tanks and concentrators.

I am fortunate in that I am able to stay at home with him, I spend the majority of my days holding him and loving him, hoping that he feels my love for him and at night, I grieve. I grieve for him and for us, for the things we have lost and for the things we will never have. I feel guilty and I worry that I’m not spending enough time with my oldest son and my husband and I pray that I can keep it all together to make it through just one more day and I pray that God will grant us another tomorrow with Kaleb.

We just celebrated Kaleb’s second birthday which is very bitter sweet - we celebrate every day because we know each day that passes is one less day we have with him. 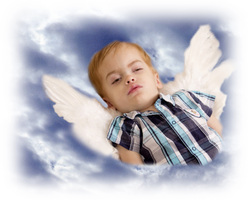 On October 3, 2012 our little warrior took his last breath.  Rest in Peace little one, until we are together again.